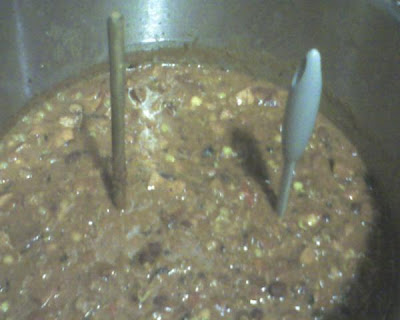 Feeding a fuckton of people? Make this!
(between paragraphs, cook for an hour, partially covered, stirring every ten minutes.)

Cook on low until translucent. turn up on high and cover to brown. push that to one side and add three chopped kielbasa - one turkey, one lite, and one polska (all Hillshire farms or whatever's better - each is one pound) to the other side. Let it brown. Then, chop 3 tomatoes into small pieces, drain, and add. Stir. Add cumin (easy does it - I can't tell you how much - add some, stir, taste, repeat) then stir once more.

Cut three pounds of cubed chuck into smaller pieces. Toss in a 50/50 mix of fine cornmeal and flour. Add to pot. Be vigilant about stirring at this stage - it may be easier to remove everything from the pot before browning the meat. Some would brown it first, but I'm trying to more or less describe how I actually made it.

Add one can Ro-Tel Mexican tomatoes and jalepenos and one large can of diced tomatoes, along with one large red and two medium yellow peppers, grilled, skinned and chopped roughly. They'll break up.

Empty a bottle of Cholula Chili Garlic (with the brown top. I originally did this with the original, which is fine, but I'm a garlic fiend) across the top of the chili. Turn the heat up. Let it bubble around for a bit until you see the sauce start to meld on its own, then turn the heat back to normal and stir.

Add two cans vegetarian baked beans and a whole bunch of crunchy sprouts - i like garbonzo, pea, and lentil - nothing stringy. I used a pre-pack mix with pea, cow pea, red lentils and chickpeas, a total of 36 ounces.

Turn up a little too high and cover, then rescue before it burns too much on the bottom, then scrape it off. If you've made enough and haven't burned too badly, this'll make the whole pot smoky and awesome. If not, then you blew a lot of money on tons of ingredients and burned them. Good job.

Simmer until thick. Let cool in fridge until fully chilled, then ladle into huge Ziploc bags. Stack and freeze these.

now the fun part - what I did wrong!

If I was on the ball, I'd have browned ALL the meat off first - that way, the excess flour and cornmeal (which you'll get if you try to coat too much of it at once) caused burning issues but only mild stickage. That would also have let me drain grease from the kielbasa, but my chili benefits from the leaching of the flavors - and everythign else in the chili is dense and meaty - the kielbasa becomes soft, much like in the traditional Polish cabbage and 'basa, and gives its flavor to the chili.

I may have gone overboard in the direction of dense and meaty with this chili, but here's my tip for taking care of that - legit, not-from-concentrate no-artificial-anything orange juice. In a pinch, you can use orange soda, which actually works better. Tomorrow I'll simmer, taste, and perhaps hit it wiht a shot of low-acid orange juice concentrate if the flavor portrait is too dark. (I know I just said not from concentrate but guess what? I can't afford that, and this is the same stuff but more potent so I can use less of it)

Last time I cooked with olive oil I used plain 'ol olive oil. Never again. Store brand extra virgin is miles, MILES beyond it and the difference was evident the second my pot started getting hot. Rachael Ray may be evil for many, many reasons, but she's right on always using extra virgin. (I refuse to call it what she does)

I like chili on rice, with enough rice that it's more of a chili-rice amalgam - even though the gravy on this one is fucking delicious, I'd rather have it infusing grains. It'd be lovely on couscous, or mashed potatoes. Stuff arancini with it for all I care. (hmmm.....)

Posted by The Management at 8:28 PM

Don't like the "EVOO" huh? lol
this made me smile because I can sooo hear you saying all of it in your sexy voice!

shoot me an email soon. miss talking to you!
long licks and kisses...
your favorite Iowan