Wake Up a Kitten Stew 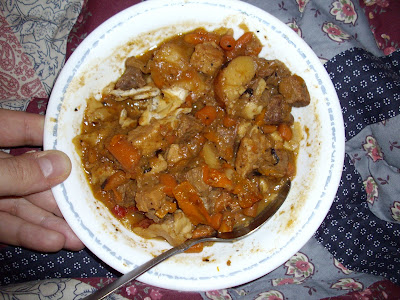 mix a pound of stew meat with flour, salt, pepper, and other seasonings. set aside to come to room temp

chop a large white onion and a large yellow onion. put in a large pot with hot oil to cook down. season the oil with garlic powder before adding the onions. let them cook down a bit until you finish chopping hte sweet peppers and carrots, which should go in together.

add amber ale and apple cider. Stir and cover. (For cooking's sake, use a microbrew and a cider that you like the taste of. I don't enjoy Fat Tire, but I only tasted it from the bottle and I knew it'd be good with browned beef in a stew - I'm not the first to do it. My cider is amazing local Iowa cider, which is like getting your throat massaged by a Pink Lady. (it's an appple, look it up.)

Brown the beef and two good pork chops, chopped and floured like the meat, in a separate skillet, then add to the main pot. then add apple cider or beer to the saute pan and scrape off the brown stuff, cook it down a bit then add to the stew. Stir. If the liquid looks like it's getting low, taste it then add beer or cider or water. Fuck water, but that's just me.

Most people use beef stock in beef stew. Fine by me, but this recipe used a 22 oz bottle of Fat Tire Amber Ale and a few generous pours and a pan-cleaning quick reduction of the meat saute-pan of gorgeous amazing local Iowa apple cider. The meat, always floured and seasoned befrore all being browned, benefits from slow-cooking. Two hours after I set this on low and let it bubble gently, the beef has gone from five chews to three. THe pork is tender, juicy and tastes throughout the chewing process.

Potatoes should be roughly equal size, of width that you'd hold your thumb and forefinger apart to indicate somone has a very small penis. Larger if you're cooking it longer. Carrots can be any size - I chopped up a bunch of baby carrots with this chopper thing in my friend's house. Only knifework was chopping hte onions in half so they fit in the chopper.

I spiced everythign perioudicially with lawry's seaoned salt and some random cajun seasoning that was on the counter. stuf was salted and peppered. the goal is layers. It worked out well.

If you were to sneak some halved carrots down to the bottom while it's finishing, you'd be rewarded. I see why people cook with Fat Tire. Didn't really enjoy the taste, but man it goes great in gravy.

The onions were cut rather large but more or less disappeared. Pearl onions would be delicuos in this, as would fingerling potatoes.

Also, there's some cheap whiskey added midway through cooking. I'm not sure why. But there's a little extra smokiness at the end I can't place.

Don't sweat burning some of the onions at the very beginning.

Good apple cider is worth it. Pay extra for local if you can. The fruitiness will get more complex and bring all the flavors together.

Damn, how could I forget.. After you get all the ingredients together, crank your burner to high and let it bubbble away madly. when it's super=hot, add enough flower to cover the top and let it cook for a bit, then stir in. Give it five minutes on high and then drop to a low simmer, and give it two hours, stirring occasionally.

I would eat this on brown rice cooked in chicken stock with trader joe's soycutash and garlic salt. my favorite fake fried rice.

Speaking of stock, sure you can use stock in this. I would have, but I forgot to buy it - yay fucking up as the mother of invention.

As for how much cider I used? No farking idea. But it's great with whiskey. Gonna have some now. And a little more stew. g-dspeed.

p.s. Why "Wake Up A Kitten Stew?" I put the dish down next to a sleeping kitten to shoot for this post, and the kitten jumped up instantly and began lapping away. 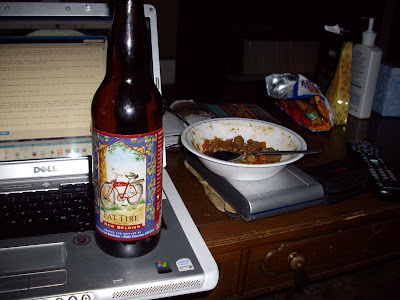 Posted by The Management at 1:53 PM