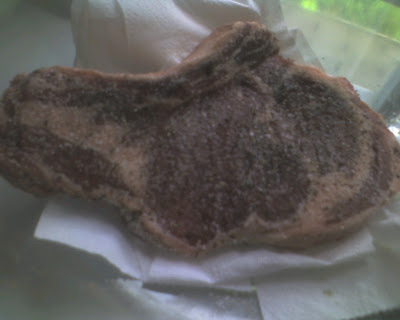 Pull the steak from the fridge half an hour before cooking. Salt and pepper liberally on both sides. (you CAN overdo this) Rest on paper towels to absorb moisture. Pat dry every so often as it rests.

Cut the potatoes into semi-identical pieces, slather with extra virgin olive oil, kosher salt, fresh cracked black pepper and garlic powder. Put on the bottom shelf of your oven at 350 for half an hour, move them around, then return to the top shelf for another half hour. I used an enamel casserole dish for this, but anything that's deglazable will do. I wouldn't use cheap nonstick, but then again I almost never do anyway.

Rub butter on the bottom of the pan you're using for the steak. Use something heavy. Make sure it's big enough for the steak. (mine wasn't really, sigh) You only want enough to coat. Heat thoroughly at 3/4 power (for me, anyway) until butter shimmers.

Add steak, laying away from you. Once that side has a good sear, flip the steak and add an eighth of a stick of butter. swoosh it around the pan to make sure it distributes evenly, and lift the steak so it can get underneath. This is not enough butter to baste with.

(It is, however, enough butter to set off the smoke alarms in my house. In the time it took me to run outside, put the pan down, and open enough windows to kill the alarms, the steak went from medium to well-done. If you live in a New York apartment, this may not be your dish.) 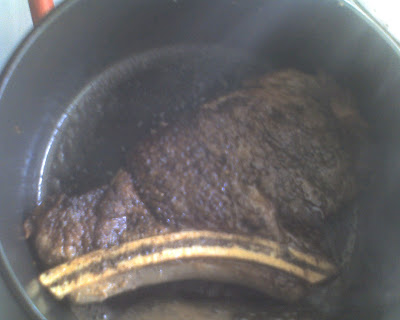 Pull potatoes from the oven. Deglaze the pan with milk, rubbing with a silicone spatula until all the brown bits are off. Occasionally poke at a potato chunk to break it up, but just keep stirring - the heat will bring everything together. Add butter to taste. I didn't want any more salt or pepper. Mash until as creamy as you want. 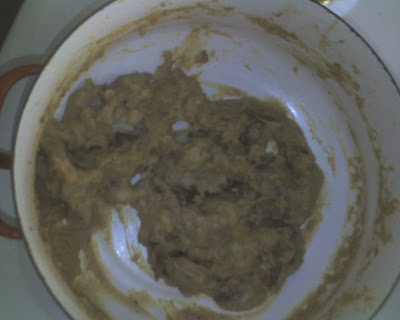 When the steak's gorgeous on both sides (may need to flip again to brown the top) serve it on top of the mash. Yum. 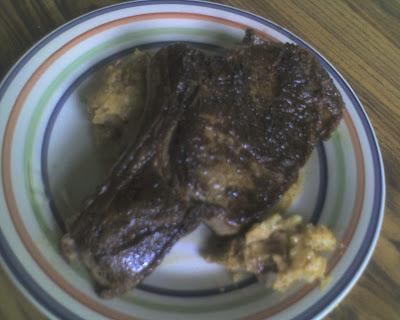 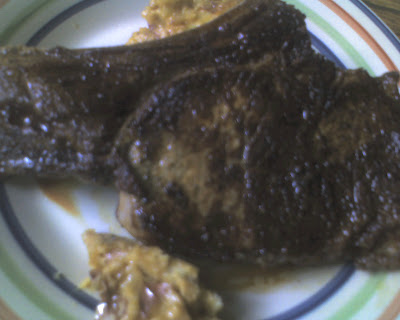 So why are the potatoes trashed? Because they're baked and mashed! At least they're not fried. *rimshot*
Posted by The Management at 11:18 AM