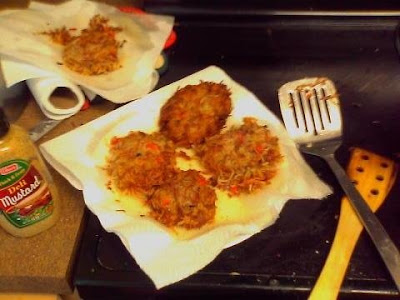 so we made a fusion potato pancake. a couple parts boxty, a couple parts latke, and a gigantic mess - of the kitchen, that is. the pancakes turned out great.

The night before, toss the unrinsed corned beef in a crock-pot, add the sesoning packet and extra black peppercorns, cover, and leave on high until simmering, then turn to low, and cover with something heavy to weigh the cover down.

Peel and shred the potatoes in a food processor. Salt and pepper immediately after shredding and spread on a paper towel to drain (or use a colandar - no lo tengo). Moisture is death in this recipe.

Process the veg next, chopping everything as small as possible. Salt it a little (kosher salt, btw, as if you'd use anything else) and set on towels or in another colandar. Salt helps draw out water. The problem is that your corned beef is salty too and you need salt at the very end. Salt to your leisure.

De-fat (relax, it's all on the top) and shred the corned beef and then chop it so it's not stringy. Add to a large bowl with the veggies and potatoes, along with the mustard and garlic. Cover, in a colandar/on paper towels, for half an hour. Go take a nap. Cooking is tiring.

After you wake up, pull the pancake mix and fuck with it a little. Make some balls. Stir it around. Have extra liquid? Add matzoh meal. You'll feel when it comes together. 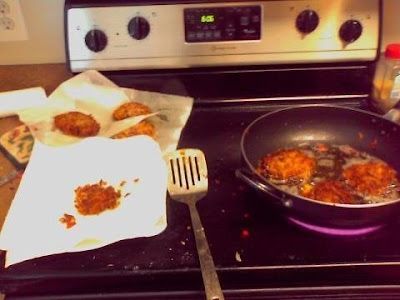 Get enough oil into the skillet to cover the pancakes most of the way. You're not going for thin and crispy here. Make patties, squeeze out as much liquid as you can over the sink so it doesn't glom up the rest of your mix, and fry. For easy adding to the pan, use a metal spatula with a little oil on it. Slap the patty onto the spatula, and slide it into the oil with something that burns much less than your hand , for which you will be grateful when the oil spits on you. It will. Believe it.

Have paper towels or a drying rack ready. About eight minutes on each side, but keep them going until they're deep golden brown on both sides. You want a molten exterior, and that's harder the thicker they are. 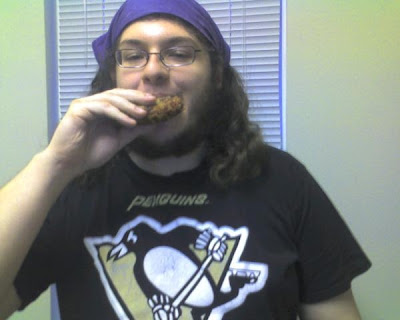 Serve with car bombs. Boom.
Posted by The Management at 4:35 PM